Home → About Us → Controller 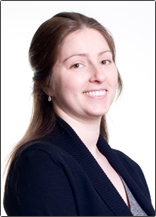 Jennifer is part of the original founding company. Throughout the years, she worked in various departments of the business and during summer breaks from college she also interned at the company. Upon graduating college, Jennifer was employed at PNC Bank in Philadelphia, Pennsylvania in the Asset Backed Securitization Group.  While there, she completed the General Securities Representative Exam (Series 7) to become a Registered Representative of a broker-dealer in the United States.  Jennifer also earned her Series 63 securities license, allowing her to solicit securities in the state of Pennsylvania.

She officially joined Integrated Service Solutions as Financial Analyst I in 2006. In 2008, she was promoted to Controller where she now oversees a finance department that includes financial administrators and an accounts receivable/payable clerk. Her focus is on streamlining the department to include electronic timesheets for employees, working with customers to decrease the number of days to collection for invoice payments and electronic invoicing and payment submittals via online for the company’s growing customer base.

Jennifer is a graduate of Muhlenberg College with a degree in Business Administration and a concentration in Management.

Celebrating 5 (Plus) Years of Making a Difference

Jen received her 5 Years of Service Excellence Award in 2013. She has played an integral role since the founding of the company in 1998 by her commitment to service excellence.

One phone call or email is all it takes to ensure service on all of your test equipment and instrumentation. Pharmaceutical, Biotechnology, Medical Device and other FDA-regulated Companies are our specialty. Call 610-287-3433 or Email Us

Call Or Email Us Today